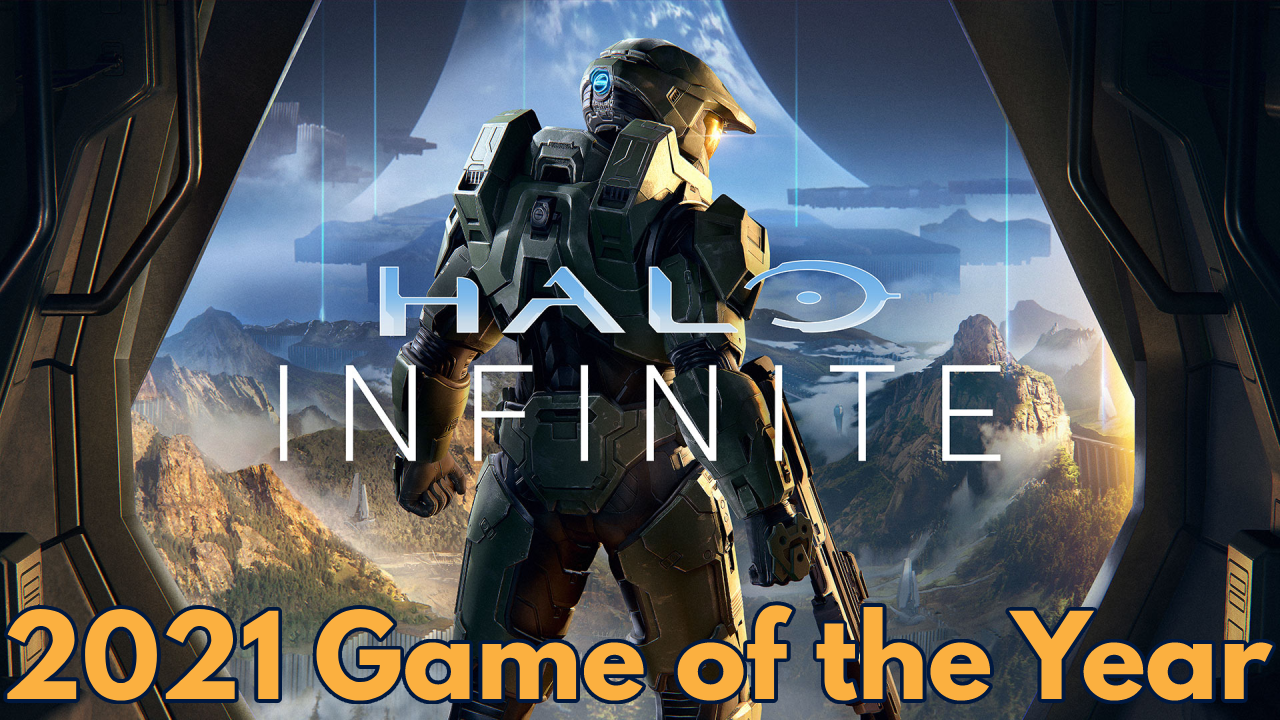 Halo Infinite is the Goodnight Groofs 2021 Game of the Year – our inaugural award.

This wasn’t a particularly difficult pick for us. In a year in which only one game scored a 90 or above on OpenCritic (Forza Horizon 5), and one in which many people would agree that the medium wasn’t necessarily pushed forward in any meaningful way, the thing we reverted back to was “fun.”

Matt: I’m taken aback by how much I love Halo Infinite. I was a massive fan of the original three Halo games, but promptly fell off the series following Halo 3. As much as I was hoping that Halo Infinite would provide the right re-entry point for my return to the series, I was in no way expecting it. Hell, on Game Groofs a few months back I spoke about how much more excited I was for Battlefield 2042 than I was for Halo Infinite. Though I wish I were wrong about BF2042, I’m thrilled to have been wrong about Halo as well. Although it’s not perfect, Halo Infinite provides a perfect platform for fun at a time when gaming really needs it – and specifically the FPS genre. Campaign aside, the free multiplayer is a Game of the Year winner in 2021 alone. But perhaps the most exciting thing about Halo Infinite is its promise for the future. Co-op campaign (which really should have come at launch), a heavily improved Forge, new game modes, and more will all be coming over the next six to twelve months – and then you have the never-ending content brought on with seasonal events and the battle pass (which does still need work). Just as 343 will be continuing development on Halo Infinite for years to come, this is a game that I’ll be playing for the long haul.

Paul: In an otherwise forgettable year of gaming releases, Halo Infinite closed things out with a surprise success. The free multiplayer component of this game really brings Halo back to its roots and also makes it more accessible than ever for fair-weather fans like myself. The campaign was expected to be the lacking area of the whole package, and it seems as though that shines, too. 343 has done what they can to make this game work, even though it has taken them some time, and I’m so excited for Halo’s infinite future.

Mike: I was skeptical of 343’s confidence in Halo Infinite. The game was essentially in development hell with director after director taking the helm and repeated delays made it appear that the product was on shaky ground. So when the multiplayer dropped early on the 20th anniversary of Halo, I was pleasantly surprised by the product we received. 343 finally created a Halo game that feels like Halo. They were finally able to bring in new mobility to the shooter without bogging it down and making it feel out of place. In a year of disappointing to downright broken shooters, Halo Infinite was a breath of fresh air in terms of gameplay experience. The game still has many kinks to work out, such as the customization and monetization system, but as a game, Halo Infinite has accomplished what most of the genre struggled to do this year: have fun.

Josh: I’ve discussed at length on the Game Groofs podcast about how much I’ve enjoyed Halo Infinite. The multiplayer feels like Halo of old in the best way. Most of the weapons are weighty, each bringing a unique way to approach engagements, maps are well thought-out and memorable, which I haven’t been able to say about a Halo game in a long time, power-ups (like the grappling hook) are powerful and fun, and games are generally quick and action packed. There is a lot left to be desired with the battle pass, but given that the game launched with free-to-play multiplayer as well as 343 Industries’ commitment to making adjustments with the current system, I am willing to give it a pass for now. Speaking of 343 making adjustments, how about the shift from Halo 5’s run of the mill Halo campaign (a proven method, but a tired one) to Halo Infinite’s open world concept? I won’t dive into the story, as I haven’t completed it yet, but a majority of that is attributed to how easy it is to find yourself out in the world taking out an enemy with a bounty, rescuing a squad of soldiers, or using the new grappling hook to climb up the side of a mountain. It was a bold idea, and it’s genuinely impressive to see how well they’ve executed on it. While the tasks you’re given in the open world can get repetitive, the gunplay, grapple hook, and often hilarious ways you can approach enemy engagements does a great job in keeping things fresh and fun.